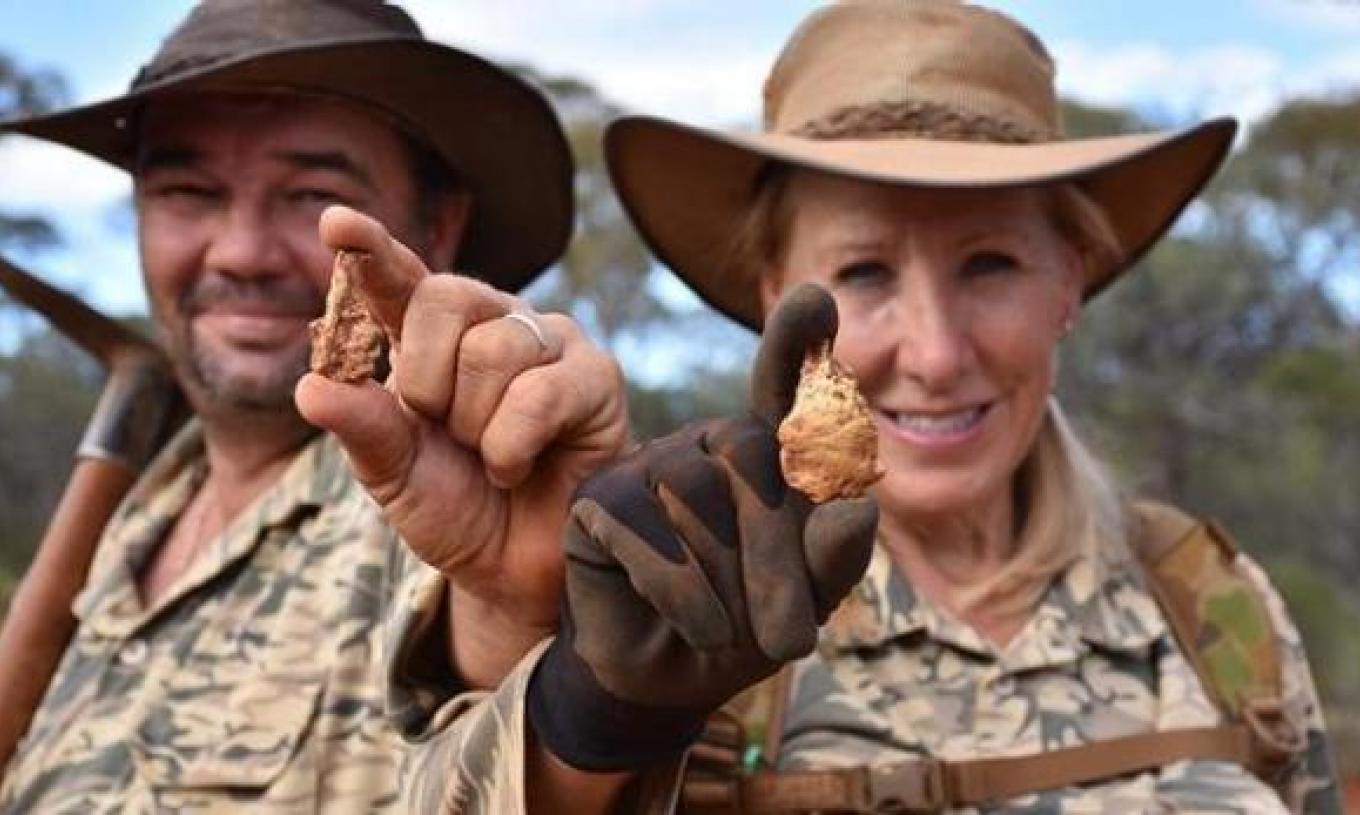 "The Victoria Diggers’ million-dollar dream is at breaking point as theindustrial wash plant they’ve hired to extract fine gold struggles under thepayload. If Neville & Mick don’t extract at least over $3000 of fine gold fromthe test sample, they’ll finish the week in the red.Ted, Lecky and Tyler Mahoney drive a thousand kilometres to the Murchisonwhere Ted’s grandfather once hunted gold. Armed with Pop Turner’s oldgold treasure map they hope it will lead them to secret spots, where theirmodern metal detectors will reveal gold Pop Turner never found. While onthe hunt they stumble across the mysterious murder of a prospector.The Dirt Dogs’ massive dry blower sits idle, while top dog Vern hunts forfresh gold ground to feed it, but he gets sidetracked after learning from aneighbour that poachers have been trespassing on the Dirt Dogs’ nearbylease."
1670943600 2022 12 13 10 00
1000a

"As all teams approach the season half way mark, the Gold Gypsies are waybehind on their 55 ounce target with a miserable 6 ounces in hand. They’restruggling to meet their $800 a day running costs as they’re confronted byone of the most dangerous snakes in Australia – the King Brown.At their German Gully site in Victoria, Neville & Mick are racing to peg theirproperty after being tipped off that a mining company is looking to securemineral rights before they do. As they fight to fund their future plansNeville’s metal detector stumbles on a target that could deliver anothermonster nugget.After weeks of delays, Eric is physically exhausted and has a huge fall fromhis digger. The Scrappers have just half an ounce of gold towards their$240,000 season target and they need Eric to push on to get their new goldprocessing plant fired up."
1670947200 2022 12 13 11 00
1100a

"The Gold Gypsies hunt for gold around a series of ancient mine shafts beforeGreg discovers a rare meteorite, which could be worth thousands of dollars.Venturing into the murky depths of an old dam with their waterproof metaldetector, they unearth a small bounty of gold.Goldzilla, the backbone of the Dirt Dogs operation, is on the move to newgold-bearing ground that could turn their season around. But there’s moremechanical heartbreak when the dump truck blows a massive tyre bringingproduction to a halt and a hefty $7,500 repair bill.Ted, Lecky and Tyler Mahoney travel 400 kms north of their home base ofKalgoorlie, following an old treasure map from Ted’s father’s gold huntingdays. They’re on the hunt for big nuggets when Ted makes a surprise find ofan old timer’s bottle buried in the red dirt that delivers a huge goldensurprise."
1670950800 2022 12 13 12 00
1200p

"Victoria Diggers, Neville and Mick discover potentially millions of dollars worthof undetectable fine gold along the bottom of their many dig holes. They’vebeen stockpiling this dirt and have to decide whether they’ll get theirneighbours, Brent & Ethan to process the paydirt in a joint venture, or go italone and build their own million dollar wash plant.The Mahoneys’ eight-thousand-dollar gamble to detect Ted’s grandfather’sgold rich hunting ground takes them into crocodile territory. This week theydetect underwater in a local watering hole convinced heavy gold nuggetshave made their way to the bottom of the pool.At their Piefinch lease the Dirt Dogs face a week of setbacks with a millbreakdown and badly damaged Vat Leech tarpaulins. When Goldzilla finallyfires at their new gold ground, it looks to be delivering over three ounces aday. If this continues, they could achieve their best cleanup of the season."
1670954400 2022 12 13 13 00
100p

"Victoria Diggers, Neville and Mick are desperate to capitalize on the superfine gold embedded in their dirt and rock. The big problem is, who will theyget to extract it, and at what cost? Their neighbours, Brent and Ethan own amassive wash-plant that can extract it, but to do the job they want 50% of thefine gold they recover. When Neville & Mick discover the deal could costthem over ten million dollars, they deliver some confronting news to Brent.In a last-ditch effort to save their season, the Mahoney’s spend thousands tohead out and battle the extreme heat and remote conditions of the Kimberleyin the north of the Western Australian desert.The Scrapper’s finally have both gold processing machines up and running,and they’re desperate to make a huge dent in their season target, but withmore breakdowns and repair bills, it could all be lost as soon as it’s found."
1671544800 2022 12 20 9 00
900a

"After raining gold all season the Victoria Diggers, Neville and Mick, find signsthat the miners of old have already cleaned out all the gold from the mineshafts they’re excavating. After days of frustration their fortunes change,unearthing a nugget that could be worth more than its weight in gold.Jake’s crucial new Vat Leaching plant is on track to deliver a 100-ouncemotherlode that could rescue the Dirt Dogs’ season. But the all-importantlicense to use cyanide has issues. Jake’s “too good to be true” plan could bedead, leaving Jake scrambling to appease top dog Vern.The Gold Gypsies risk their future digging around an old mine. Greg isoperating on dangerous ground above a precarious web of undergroundtunnels. At the end of one of the bleakest weeks in their prospecting history,their tenacity is rewarded with their biggest nugget for the season."
1671548400 2022 12 20 10 00
1000a

"As the end of season fast approaches, The Scrappers are over $185,000 shortof target and Alex and Eric have not produced enough gold to provide fortheir families. Alex invests the last of his team’s gold and his families’ onlysavings on hiring bigger machinery to reach target. But the huge gamblepushes his marriage to the edge.The Dirt Dogs season is also on the ropes and a major mechanical breakdownof Goldzilla could deliver the knockout blow while the fate of the Dirt Dogsseason rests with Jake at the Piefinch plant.Victoria Diggers Mick and Neville’s job of mining with heavy machinerybecomes increasingly dangerous as a heavy storm strikes, threatening to washout there hunt for days on end. While they wait for the ground to dry, they godetecting for relics and unearth a rare artefact that delivers the biggestsurprise of the season."
1671552000 2022 12 20 11 00
1100a

"The Dirt Dogs massive dry blower has shutdown due to extreme 50 degreeCelsius temperatures and after Vern handed management of their new PieFinch site to Jake this season, he’s barely pulled half their 200-ounce target.Their season now lives and dies on a deal Jake brokered with a nearby miningplant to process 800 tonne of paydirt. But does the pay hold the 100 ouncesof gold they desperately need to hit target?The Mahoneys decide to speed up their operation in a last ditch strategy thathas them process dirt through a mate’s wash plant. But will it deliver enoughgold before the growing heat becomes too intense to work?With time also running out on the Gold Gypsies disastrous season, a stressedout Greg gives Chris an ultimatum – find gold or move to another lease! Willhis bold decision be the game changer their season needs?"
1671555600 2022 12 20 12 00
1200p

"With intense summer heat about to shut down the season, the fate of theDirt Dogs comes down to Jake’s eleventh hour plan to process 800 tonnesof ore offsite. But will Jake’s desperate attempt to secure his team’s final100 ounces deliver the $140,000 of gold they need and restore hiscredibility?The Scrappers boss, Alex Stead, could pay the ultimate price for gamblinghis life savings knowing he could lose his wife Julie, and father-in-law Eric.As his marriage & gold dream hang in the balance, Alex makes a last ditcheffort to push himself and his machinery to ensure this isn’t his last seasonon the hunt.In the cooler east coast climate of Victoria, Neville & Mick have just metresof licensed ground left to dig and they’re thirteen ounces short. Can theVictoria Diggers unearth a season closing huge nugget before they runout of ground to dig?"
1671559200 2022 12 20 13 00
100p

"The Victoria Diggers are desperate to cash in on record Australian goldprices, but after three years of waiting for their “work order” license to minetheir German Gully gold ground, it is still not approved. With most of theirprofit from last season spent on a new washplant and loader that’s soon toarrive, they’re desperate to find big gold in a previously dug gully thatdelivered them the $200,000 Charlie’s Pride nugget last year.Rookie team the Dust Devils’ new dry blower chokes on it’s own dust and isshutdown for repairs. They urgently need the wet plant at their Siberia site,to deliver a first big payday of the season.The Gold Gypsies launch in the remote Northern Territory as they’re drivinghome from the funeral of Greg’s Dad. Their first hunt near a river that’s hometo the largest species of crocodile in the world, could end in tragedy."