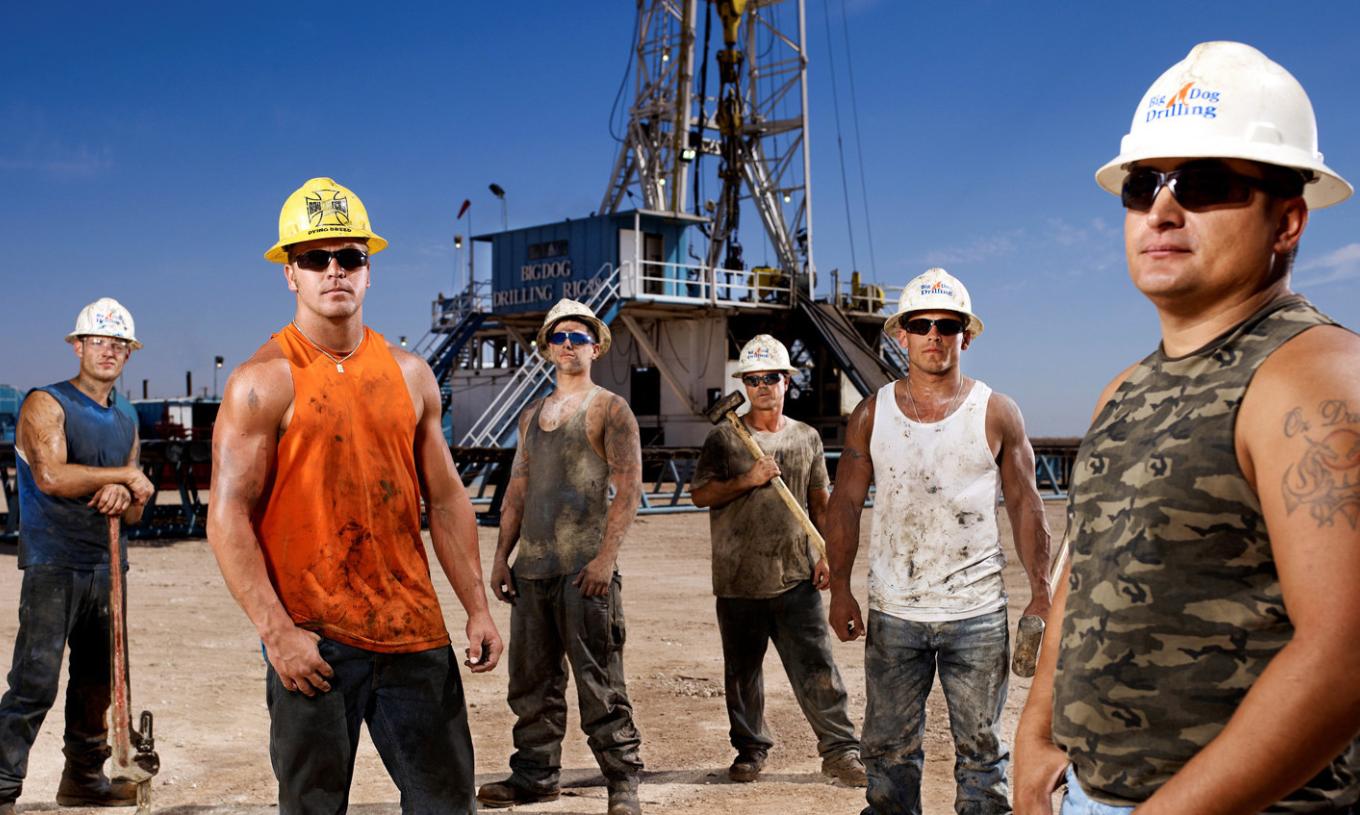 A Race Against Time

Big Dog’s owner, independent oilman Autry Stevens, is racing to save 4 expiring leases that will be worth half a billion dollars in oil production “lose the leases lose the company.” On the rig, the pressure of 4 holes in 50 days has the roughnecks at each other’s throats. To make matters worse the day crew finds is forced to train a worm. Cheston has never set foot on an oil rig, and he soon finds out that working on a drill site is somewhere between joining a fraternity or a prison gang. You have to earn respect or get run off… or worse. Cheston’s main tormentor is the driller, Pee Wee. At 5’7” this Napoleonic powder keg rules with intense energy and a clenched fist. Within minutes, he’s ready to send Cheston scurrying down the road with his tail between his legs. But soon Pee Wee has another roughneck to worry about… oilfield veteran Gerald Williams in joining Big Dog 28… when he finally passes his drug test. Gerald and Cheston are friends and Gerald’s supposed to be the worm’s mentor on the rig…if he can get there. Even though shifts change, the rig never stops and neither does the drama. Ron is the driller on the night crew and his main job is wrangling roughnecks, Josh, Travis, and Brandon. But when Travis is late hot head Brandon wants to fight him on the rig. Tensions ratchet even higher when the rig finally finishes its first well and has to move the massive rig 1 mile to the next drill site.
1675468800 2023 02 03 19 00
700p

Gerald’s finally working on Big Dog 28…but he’s working as derrickman. He’s second in command and has to take orders from driller Pee Wee, a kid half his age. But Gerald has his sights set on Pee Wee’s job. When Gerald gets caught up yelling at Cheston the veteran forgets about his job and lets the pits go dry… a rookie move that could cost everyone their jobs. Pee Wee doesn’t notice because he’s too busy trying to get Cheston to quit. When Pee Wee pushes Cheston to his breaking point it looks like Cheston’s roughneck career may be over. When the night crew takes over the rig Brandon makes a rookie mistake that brings drilling to a screeching halt and puts everyone’s jobs at risk. When driller Ron threatens to demote Brandon, the roughneck explodes in Ron’s face. Tool pusher Freddie has no use for a hand that costs him time and money so Brandon may be hitting the unemployment line. Travis is worried for his buddy Josh’s safety because Josh doesn’t have his mind on the rig. He’s thinking about his girl Sydney… who eventually shows up at the drill site and drags Josh away.
1675728000 2023 02 06 19 00
700p

Big Dog Rig 28 is racing to finish the 2nd of 4 wells in 50 days when tool pusher Freddy, the on-site rig manager, learns about an upcoming rig inspection. The crews are already on edge, but Freddy fuels the fire when he begins telling everyone how to do their jobs as he tries to get the rig ready for inspection. Driller Pee Wee is at odds with his two new crew members. Worm Cheston makes a mistake that threatens the life of everyone on the rig and veteran Gerald schemes to take over as a driller.
1675814400 2023 02 07 19 00
700p

The Hole from Hell

The roughnecks of Big Dog 28 are on schedule to make their goal of 4 holes in 50 days… something no one thought could be done. But the third hole is proving to be much harder than the first two. The crews dub it “The Hole from Hell.” Pee Wee’s daylight crew takes the brunt of the problems. Equipment fails, injuries slow the crew, and tempers flare as hot as the west Texas sun. Pee Wee continues to struggle with Cheston. Even Gerald turns on the worm. And Ron’s evening crew isn’t immune to problems on the rig. He loses a good hand to another company and must break in a new guy who calls himself “Tank,” but Tank’s brawn is rendered unless when he forgets his boots on the first day. Things go from bad to worse when the drill pipe “twists off” and drilling comes to a standstill. Then, it’s a race to repair Big Dog 28… and with every passing minute, the roughnecks get further from their goal of “4 in 50” and closer to losing their jobs.
1675900800 2023 02 08 19 00
700p

The crews of Big Dog 28 have been charged with the near impossible task of drilling four holes in fifty days. If the crews can’t make the deadline, the company will lose the drilling leases on their remaining two wells that will be worth two hundred million in oil revenue – lose the lease, lose the company. On the day crew, the rig’s worm Cheston finally gets in the good graces of his hotheaded driller Pee Wee. The two find common ground just long enough for Cheston to get a promotion, but as he will soon find out: with the new position, come new dangers. The nervous worm will have to use everything he’s learned if he expects to keep his fingers intact. On the night crew, driller Ron Pane is finding his hulking roughneck Tank’s attitude harder to manage. As the ex-prizefighter is forced into scrubbing duty, Tank’s ego is pushed to the edge, but hurt feelings are the least of Ron’s problems. Tool pusher Freddy plays on Ron’s and graveyard crew driller Pete’s worst superstitious fear with pranks that may have put a bad omen on the rig. After a series of problems cripple 28, Freddy is forced to rethink his actions. Off the rig, Josh grapples with the tough hours of the roughneck lifestyle as he tries to keep buxom Midland Roughneck’s cheerleader, Sydney, from slipping through his fingers. He hopes a late-night dip in the pool and a west Texas-style barbecue will do the trick. Back on 28 – the rig is plagued with mechanical problems and there is plenty of blame to go around. The rig isn’t drilling, and Big Dog owner Autry Stephens won’t stand by for long before he decides to shut this operation down and fire the crew.
1675987200 2023 02 09 19 00
700p

The Well from Hell

The Well from Hell has the roughnecks nervous, and if they don’t finish this hole by the end of the week it will mean the unemployment line. The blame for most of the delays and setbacks has been placed on Pee Wee and Freddy. Pee Wee starts his shift determined to get ahead, but runs the rig hard and is hit with a brake failure. Rig supervisor David Kiser is called out and Cheston is convinced this will be Pee Wee’s final curtain. Gerald is waiting in the wings, confident the driller job will soon be his, but he is about to make a decision that will change the course of his life and send him into a downward spiral. Cheston struggles to save his friend but, in the end, Gerald’s demons get the best of him. Ron and his evening crew show up and will have to clean up another day's crew mistake. They are not happy to be ripping pipe…again. The men are exhausted, and Travis is on edge. Ron tries to get his head back in the game, but Travis isn’t playing and walks off the rig floor. No one knows if Travis will be back. Freddy returns to the rig determined to hit total depth on his shift. He must redeem his good name in the oil field and with 9 feet left to drill what could possibly go wrong? With only three feet left to drill Freddy has to make the decision to play it safe or risk it all. Tool pusher Jerry takes over for Freddy and the men couldn’t be happier. He is a 40-year veteran of the oil field and most of the crew have worked with him for years. When they are a man down on the rig floor Jerry confidently steps forward to take over and seconds later a heavy chain snaps and slashes him across the face.
1676073600 2023 02 10 19 00
700p

Disaster strikes Big Dog 28 when a snapped chain leaves tool pusher Jerry blind in one eye. After being fired, Gerald finds an unlikely source of income, but when talk turns to the wedding plans, his stubborn attitude puts the engagement in jeopardy. Pee Wee kicks Cheston off the day crew for mouthing off to the other hands, while Tank’s reckless attitude puts the night crew in danger. Fighting on Big Dog 28 brings supervisor David Kiser to the rig to decide who stays and who goes, but when the transmission overheats, Big Dog’s hope of finishing 4 wells in 50 days goes up in smoke.
1676332800 2023 02 13 19 00
700p

It’s down to the wire on the Big Dog. The roughnecks have three days to finish the final hole. Pee Wee’s stoked now that he’s got Tank on the day crew. Ron’s less thrilled to have Cheston working the evening shift, but he’s determined to get his worm finally up to speed. Now with the rig in perfect working order, a new experimental bit drilling at top speed, and a crew primed to make a hole, it all goes perfectly smoothly, right? Wrong. All hell breaks loose when Mack takes a pipe spinner to the head. Tank gets run off the rig for failing a drug test and Freddy is forced to run the drill. Meanwhile, off the rig, the clock is running down on Gerald's life as a single man. He wishes he were still on the rig as Rosie drags him from one wedding store to another. Picking out wedding rings is not his thing. The crews race to make the final TD and Autry prepares to shut it down if the roughnecks miss their deadline.