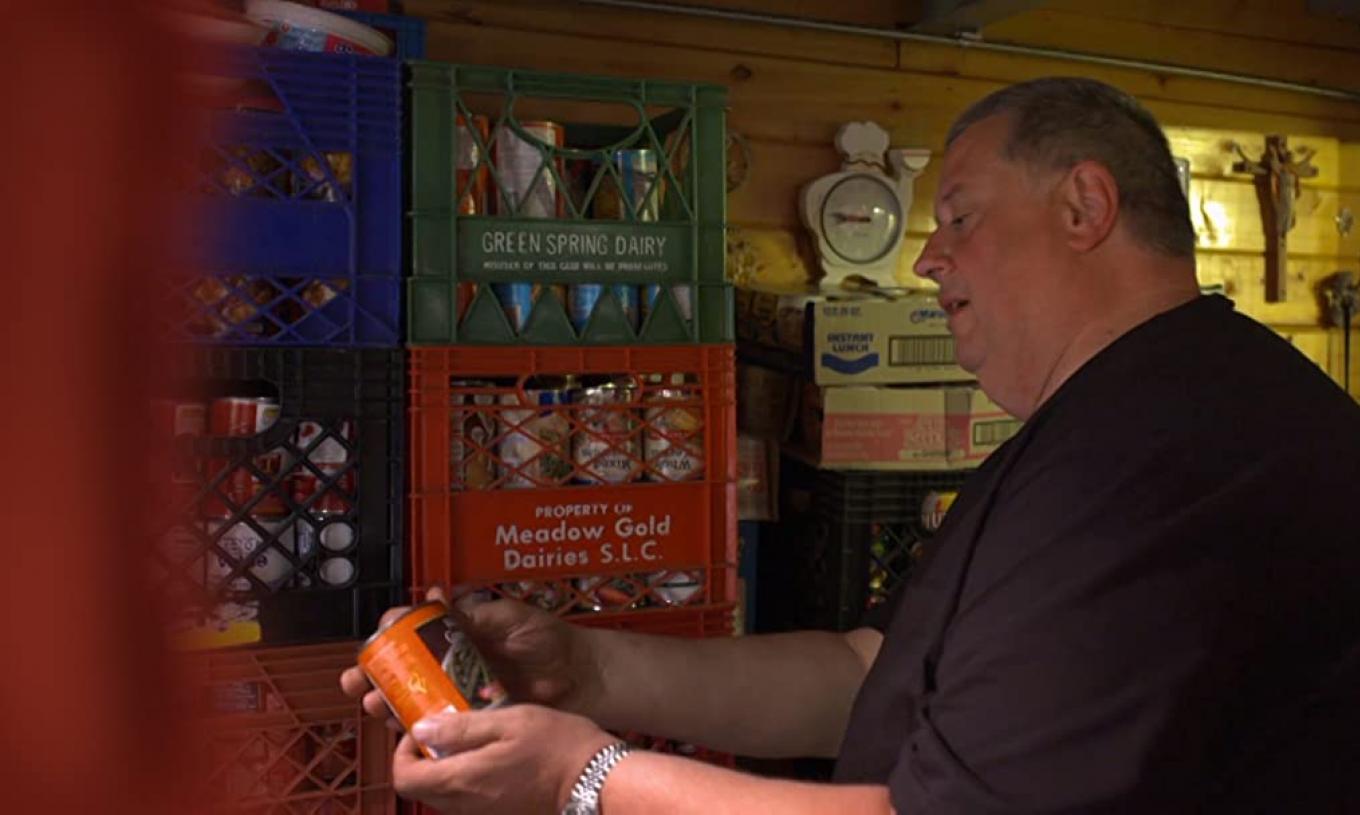 We go inside the lives of more Americans prepping for the end of the world. First we profile Bryan Smith, who lives in rural Florida and fears a looming economic collapse will lead to violent social unrest. He is growing tobacco and sugarcane to barter, and is also manufacturing his own ammunition. To protect his family, Bryan has decided to install an underground bunker. He contacts his childhood friend, Ron Hubbard, a steel manufacturer in Los Angeles who builds bunkers professionally and has agreed to build a custom one for Bryan. We also meet Christine, who is anxiously preparing for a mega tsunami that she fears will devastate the East Coast. She has converted her garage into a fully stocked doomsday ready-room and is prepared to bug-out at a moment's notice.
1657483200 2022 07 10 16 00
400p

IN THE HURT LOCKER

We meet another group of Americans who fear the end of the world is fast approaching. First we meet Snake Blocker, whose Apache heritage has influenced him to listen to his intuition. His latest dream has convinced him to prepare for an economic collapse that he believes will lead to social chaos. To prepare, he is practicing his knife throwing skills and teaching his new wife how to live off the land. We also catch up with Kevin O'Brien, a prepper from last season who has moved his family from Florida to Tennessee to protect them from a polar shift. Kevin has purchased a generous stretch of land where he plans to build a prepper fortress, complete with a well-stocked bunker. He has also reached out to Lucas Cameron, a local prepper who fears a catastrophic earthquake is on the horizon. Lucas has assembled a group of like-minded neighbors and is considering adding Kevin to the team. We follow these men and their families to see firsthand the great lengths they are willing to go to in order to survive.
1658084400 2022 07 17 15 00
300p

We meet a unique group of Americans who are preparing for the end of days. Amanda and Scott Bobbin are convinced that a comet will soon strike Earth and cause irreparable damage. The couple began prepping after Amanda heard a voice in her sleep; a voice warning her of imminent danger. The Bobbins decided to move to the mountains of North Carolina, where they purchased a home that has preps hidden throughout the property. They are now committed to the prepping lifestyle. Next we meet Lindsay and Ray, a couple in Boise, Idaho, who are prepping because they’re worried about the collapse of the world agricultural system. They practice sustainable living and have transformed their backyard into an oasis of hundreds of edible plants. Lindsay hosts a radio talk show to promote organic gardening. And finally we meet Jim D., a motorcycle lover in Southern California who fears a cyber-attack on the power grid will lead to social unrest. He has turned a 13-ton truck into the ultimate bug-out vehicle, complete with a sniper platform.
1658088000 2022 07 17 16 00
400p

We go inside the lives of more Americans prepping for the end of the world. First, we profile John and Kelly Taylor, former firefighter medics and motorcycle riders living on a prepping homestead. They decided to leave the sunny beaches of Florida and move to the mountains of Virginia in preparation of a total economic collapse. Next, we introduce you to Frank, who lives in Maine and owns a construction company. Frank's spending his golden years flying his private plane, staying fit with his wife, Elaine, and preparing for the upcoming economic collapse. Frank has built a bunker that he hopes will withstand any doomsday scenario. We also meet mobile prepper Brian Brawdy as he prepares for an upcoming terrorist attack. Brian spends most of his time on the road in his ultimate bug-out vehicle.
1658689200 2022 07 24 15 00
300p

We profile two unique individuals who fear the end of the world is fast approaching. First, we meet Doug. He currently sells landscaping stone and the locals call him Rockman. But what they may not know is that he is using rocks to prepare his underground bunker for the economic collapse he fears. Then we follow Jeff Flaningam, who has a deep, dark secret. Jeff is converting a decommissioned missile silo into a bug-out getaway. We join these two preppers as they alter their lives to prepare for doomsday.
1658692800 2022 07 24 16 00
400p

Meet Craig, a proud Alaskan living in the woods of Fairbanks fearing the collapse of the American economy. He’s secretly built a bug-out dome, designed by friend and prepping-partner, Don, 100 miles away in the feral Alaskan wilderness. Only accessible by boat, the dome will serve as a refuge for his wife and two daughters. Then we follow David, a new-age spiritual prepper from Hawaii who fears a catastrophic tsunami will strike Hawaii. He plans to bug-out to the top of a mountain with his girlfriend. We'll join these two preppers as they alter their lives to prepare for doomsday.