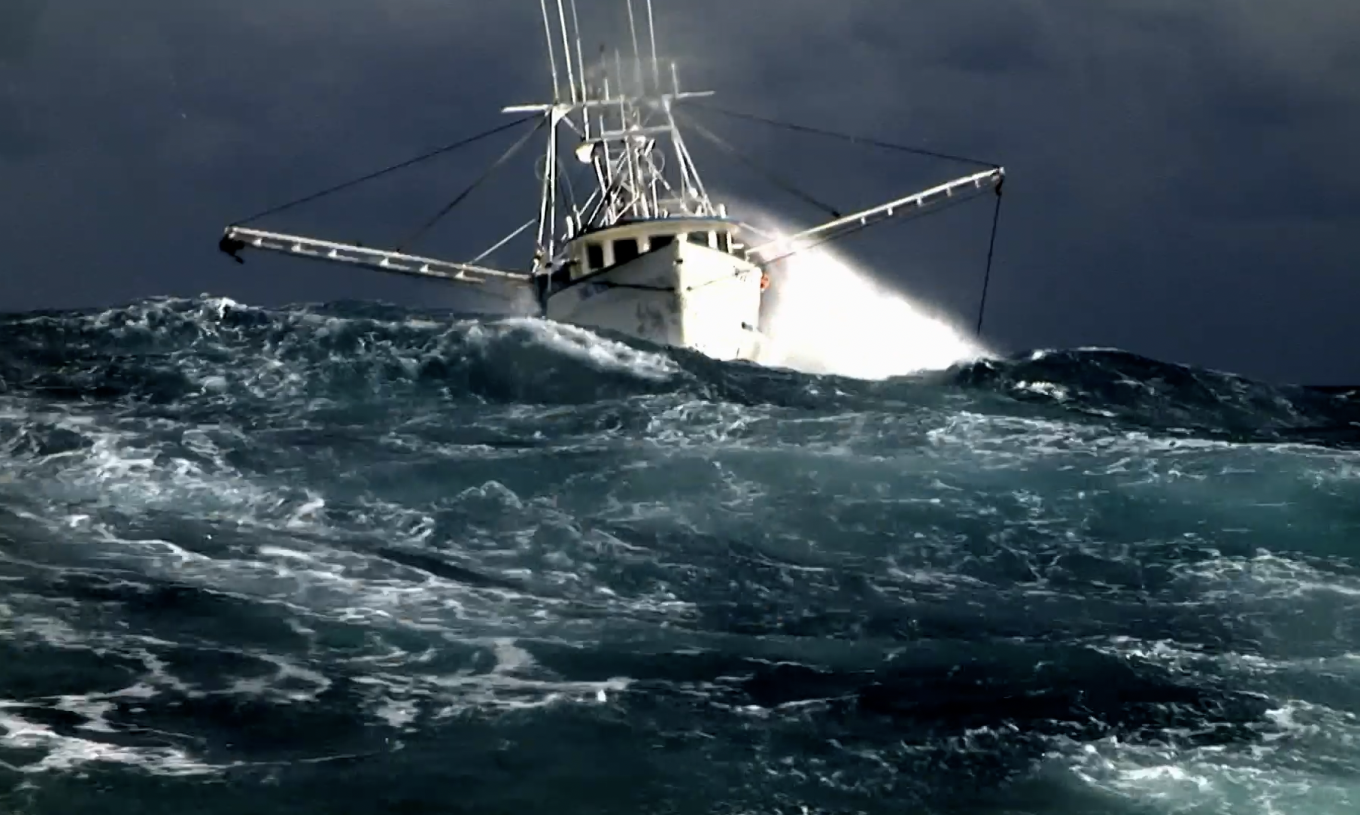 Swords: Life on the Line

What Happened on the Back Deck?

Across the fleet supplies are running low, fish are migrating away from the coastal waters, and the season’s most violent storm is on the horizon. But with only a few days left in the season, captains across the fleet are doing whatever it takes to find the fish. On the Big Eye, Captain Chomps is low on bait and food, and without enough fish on board to make a paycheck, he’s headed for another broker trip. With only enough bait for one more set, he has no choice but to try to get the smallest boat in the fleet through the storm. Desperate to land a huge trip, Frances Anne owner Rick Mears pushed former captain Slick aside and took command of the boat. But they still haven’t broken even, and they’re also running low on bait and supplies. Rick has just enough bait for two more sets – his last chance to prove he still has what it takes to bring in the fish. On the Bjorn II, Captain Greenlaw’s also fishing through the storm trying to break even. But she’s forced off deck when her finger is crushed by the hauling block. As her battered crew tries desperately to bring in the gear, the brutal conditions send a deckhand overboard. Captain Scotty on the Eagle Eye II fears the storm will scatter the fish and put him back at square one. But the experienced captain gambles and sets his gear, hoping the fish are still around. But the storm makes setting twice as tough, and twice as dangerous. With each roll of the boat, the line stretches to its breaking point, ready to snap at any moment and lash back at the crew like a bullwhip loaded with razor sharp hooks.
1675479600 2023 02 03 22 00
1000p

What it Takes to be a Fisherman

As the fall fishing season comes to a close, captains and crews across the fleet hope for big fish and big money on their final haulbacks. With crews giving everything they have left, muscling fish and shark alike, many are relieved to be only hours away from dry land. Linda and her crew aboard the Bjorn II steam into Barnegat Light nursing injuries. EMTs wait for the boat to land, ready to examine Linda’s sliced finger and take her away to the hospital. The dock is a welcome sight to deckhand Dave Hiltz, whose anxiety about fishing and being thrown overboard is too much to control now. At the end of the day, the crew relives the season’s ups and downs over a swordfish dinner at a local restaurant. Captain Chomps and his Big Eye crew will themselves through their last haulback, which turns up big fish. Afterwards, with no bait left, and no food or supplies left for the crew, Chomps is forced to take it into port in time for Thanksgiving. The holidays bring bad tidings, however, as Chomps knows he will lose Glen and Don from the crew. After their offload in South Carolina, Don makes a move to stay on board, and Chomps makes a move to get rid of him. Chomps walks away at the end, knowing he and his brother Woody will most likely have to fish by themselves. Scotty and the crew of the Eagle Eye II, after dodging a loose lobster trap, pull up their last, big haulback. As they ride into port, they are clearly the season’s top earners. As big fish after big fish get pulled from the hold in Massachusetts, the crew celebrates their big paydays after hard work. The Frances Anne and her crew pulls into port after Captain Rick’s biggest fishing day. The tension lasts, though, between Rick and ex-Captain Slick, with Slick’s concern about ever piloting the Frances Anne again after being demoted. His worries don’t last long, however, and after he and Rick meet for beers at a local bar, Rick assures him Slick’s the man for the job.
1676127600 2023 02 11 10 00
1000a

As the fall swordfishing season descends on the Grand Banks, boats along the Atlantic Coast head out into high seas, facing brutal weather and long hours to bring in the swordfish. On the Eagle Eye II, Captain Scotty Drabinowicz is eager to maintain his reputation as one of the fleet’s top captains. But his season is off to a bad start when he’s crowded out of his favorite fishing spot and forced to find a new place to fish. Captain Chris “Chompers” Hansen is also desperate to get the Big Eye to sea. Crew injuries and delays have stuck Chompers with a $50,000 bill before he’s even left the dock. Already under the gun to catch twice as much fish, Chompers is heading to the Grand Banks in the fleet’s smallest boat with three crewmembers he’s never worked with, and one greenhorn that’s never even been swordfishing. Captain Linda Greenlaw returns to reclaim her status as a legendary swordfisherman with a new boat, the Bjorn II. After a poor performance last season, Captain Greenlaw vows to retire from swordfishing if she can’t bring in the fish this year. But before she’s even left the harbor, disaster strikes when the boat runs aground and the crew starts to wonder if Captain Greenlaw still has what it takes.
1676131200 2023 02 11 11 00
1100a

Captain Slick arrives to the fishing grounds only to find out he is in second position and not exactly where he wanted to be. After a hurried set out, the crew on the Frances Anne experiences an exhausting first haul back. Even though the rough day turned out to be a solid first set, the captain is less than happy about his young gun crew and is not afraid to express it. The seas are high and so are the tensions on the Bjorn II. After a morning of colossal waves and monster fish the crew soon realizes that this is not lobstering. After a man goes down, Captain Linda quickly orders another off the deck. With two men down can the renowned sword fisherman reclaim her title? On the Eagle Eye II, Captain Scotty knows that he will not have another 10,000-pound day but he is testing the waters and using his experience to plot out his next move. After sharing information with Captain Linda and the Bjorn II, Scotty and his crew catch a slew of blue dogs but keep shark tagger, Lisa Natanson, busy. The Eagle Eye II wonders if this wave of less than stellar sets has to do with the bad luck that the Bjorn II has been having. The fishing vessel Big Eye has finally made it to the Grand Banks fishing grounds and the captain is chomping at the bit to set out. With a greenhorn and the rest of the crew older than himself Captain Chris is cautiously optimistic about how their first trip will go. After an average catch and beeper buoy mayhem aboard, Chris is wondering if his decision to go to the Grand Banks was a good one.
1676732400 2023 02 18 10 00
1000a

The luck has changed on the Frances Anne. After a week of great fishing, Captain Kleme and his crew of 20-somethings are all sharked up. When they’re not pulling in blue sharks what they do catch is nothing but shark bait. To make matters worse, Slick’s lead deckhand, Lemmy Eastburn, neglects his duties and lets the boat’s fish hold fill with water putting the boat’s 50,000 catch and his job at risk. After a season and a half without turning a profit Captain Linda on the Bjorn II turns it around. She continues to work with the fleet’s top earner, Captain Scotty on the Eagle Eye II. As the dream team of Scotty and Linda continue to pack their holds with fish, they hope the rest of the fleet won’t get wise to their numbers and try to muscle in on their water. The seasoned crew aboard the Eagle Eye II battle the elements beyond the capacity of their gear. Stormy seas part the mainline with a backlash that knocks veteran deckhand Tommy Fox to the ground. Meanwhile, last season the fiberglass-hulled, Big Eye suffered damage due to the harsh Grand Banks weather. This season Captain Chompers pushes his crew and his boat to their limits so he can get off the Grand Banks before fall weather picks up. He’ll cross anything in his path to get what he wants – even another boat’s gear. Finally, chaos ensues when another long line captain muscles his way into Scotty and Linda’s prime piece of water. Scotty manages to defend his turf, but Linda may not be so fortunate. Against all odds, Chompers manages to fill his boat, but he’s got a 1000-mile steam and a storm the size of Texas standing between him and home.
1676736000 2023 02 18 11 00
1100a

Overloaded and Into the Storm

On what could be the last day of the fall season for Captain Linda and her crew, Mother Nature has set a high price for swordfish. Violent seas toss Captain and crew about as they race to fill the hold with some of the biggest fish Captain Linda has ever seen. By the end of a bruising day, Linda and the crew of the Bjorn II are headed for Newfoundland and their first offload of the season. Slow fishing has the crew of the Eagle Eye II on edge when deckhand Darryl Wallace loses what could be the only big money fish of the day. Moods improve with the fishing as a twenty-thousand-dollar bluefin tuna is hauled aboard. With the valuable fish packed away in the hold, Captain Scotty and the crew brave rough weather to set the gear again. With a boat full of Grand Banks swords, Captain Chompers and the crew of the little southern boat, Big Eye, are in the middle of a thousand mile steam to New Bedford. Low on fuel, Captain Chompers has no choice but to push through the heart of a strengthening storm the size of Texas. At the dock, a fiery offload blow up leaves Chompers a man down. Despite a run of bad blood between Captain Chris Kleme and deckhand Lemmy Eastburn, all is forgiven amid an epic run of great fishing. By the end of the trip, Captain Slick and the crew of the Frances Anne have the fish hold stuffed and are packing fish anywhere they can find space. With what could be the biggest trip ever on board, the Frances Anne’s young gun crew has secured coastal bragging rights.